Things you have to know about “Dubbing” 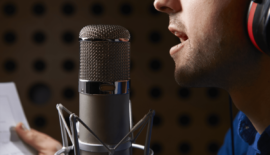 Dubbing is the most prevalent method used to make foreign-language “programs, Movies, plays” available to a domestic market. Adapting the source language “script text” to the target language “script soundtrack”, the sound and lip movements of the characters/speakers on any screen you watch from. The process of replacing the original dialogue track with localized dialogue.

It’s not like subtitling, as in subtitling you don’t have to worry about lip-syncing, the only thing you have to care about is how long do the words need to stay on the screen so an average person can read, how many words can fit on a screen, which is a different art than dubbing.

How does Dubbing work?

If we’re talking about movies, you have to know that lots of people are more familiar with dubbing than subtitling, when a foreign language is dubbed, the translation of the original dialogue must match the actor’s lip movements on the film screen.

Soundtrack script is like a whole new book, with dubbing you need to recreate a dialogue from its native language to audience language. Dubbing is also used to add sound effects to the original soundtrack.

The goal of voice casting is to find the best voice that appears to sound like it’s coming from the character you’re watching, sound near to that image you see, the sound must fit the face and character shape if actor voice quality doesn’t fit the character, but having a good voice, then he, unfortunately, is out.

As much as there are a lot of steps that go into making sure the dubbing is a success, remember that the process can be different depending on which technique you decided to use while dubbing, which actors you choose, who you work with. To get perfect dubbing, you also need to choose a good sound engineer, sound engineering and mixing are the keys to getting it. The Arabic Voice Over Company is the first marketplace in Egypt and the Middle East specialized in all voice services “Dubbing, Subtitling, Post Productions, Music Composition, Editing & Script Proofreading” in Arabic and all languages.

We are glad to have you as our new customer, for more about The Arabic Voice Over Company service, feel free to talk to us.

What’s the voice over meaning & How to choose your trusted company that you will deal with?
February 1, 2022

Voice Over Marketing Tips for Your Business

5 Steps To Be a Good Voice Over Artist

The most 5 important points to focus on, before working in the field of voice over

Do you have fear with microphone